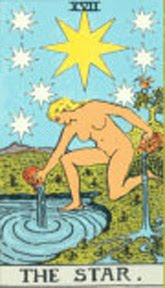 In these modern times, amateur exhibitionists aim to become a "Star" by shedding clothes on the internet. Notice the naked lady pouring her photoshopped jpegs into a metaphorical pool of water representing her Twitter account. To the right she is pouring the fugly pictures into the dirt because no one wants to see those. The star towards the top of the card represents the Hollywood walk of fame, but note the lack of her name on the star. This card may sometimes represent the futility of posting nude pictures on yourself on the internet. But when revealed in my spreads, I try and stay positive. I have 597 pictures of myself on face-google wearing nothing but a saran wrap bikini, being sprayed with a water hose filled with Dr. Pepper and and spitting cherry pits into the mouth of a lesbian MILF . I know one day those cherries will bear the fruit of a successful Low Rider Car Show modelling career.
THE MOON 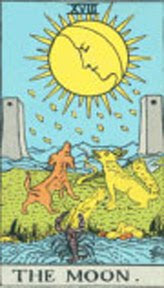 The moon makes people do crazy things. Especially the new moon, which is like a giant flashlight in the sky making it easy to have sex in the middle of a busy intersection. It also makes ordinary people think they can bake home-made bread, or build the tallest Jenga tower ever with their family and expect it be impervious to their uncle's shaky hangover hands. It's important to note that the dogs depicted in this card are not howling at the moon-man, because he is already showering them with beggin' strips and turkey cold cuts. The lobster below them is aiming for the scraps but won't get any due to his bottom-feeder status, which is sad but also hilarious . My dog loves this card, so her deck contains this card and this card only.
THE SUN 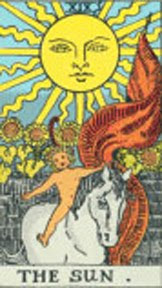 The Sun is the opposite of the Moon. (Don't quote me on that, I'm still not 100% sure of that scientific theory and may need to consult with my gypsy). What I do know for certain is that the sun doesn’t inspire people to do socially inappropriate/fun things. It just makes you sit around in a beach chair drinking Tecates and getting the melanomas . The boy on the horse is holding a giant tarp which he will use to cover up the sun and kill off the poisonous sunflowers. This card represents the death of nature for the good of humanity, and when revealed in a three card spread you should try and watch Jessie Venturas "Conspiracy Theory" episode about the carbon monoxide-spreading tree epidemic cover-up.
JUDGEMENT 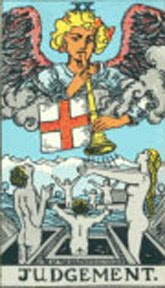 "Let he who jugdeth cast the first stone into the glass houseth".
In this card Judgement is doled out by bugle rather than gavel. I love Bugles and eat them regularly, and I can just feel this card judgeing me for it. So 'big deal 'my judgement is bad ,but hey, that's what makes me get out of bed in the morning. And If my friends have poor judgement then the more the merrier. The people depicted in this card need positive reinforcement instead of a bugle in their face playing the same old tired judgmental song. Change the record already... (The angel also seems to be judging the sickly grey -looking people for not donating to the Red Cross. Why doesn't she/he donate some Emergen-C to them? They need medical attention. (I suggest using this card to cut lines of cocaine. I don't even do coke, but this would be purely for irony/spite). 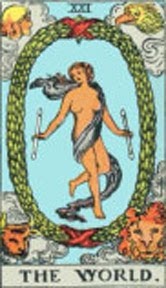 Finally! This amazing card combines all my favorite elements of the Major Arcana. Here we observe a Christmas tree-wreathed hippie surrounded by an angel, a lion, a griffin and a devil , all surrounded by smoke. She is holding two pipes in her in her hand because she smoked those creatures into existence. The implication is that by smoking (angel dust), you can be strong (hang out with lions), read magazines all day (like the griffin), and hook up with the man or woman of your dreams (with thanks to devil). My interpretation of this card is that everyday can be Christmas if you are high enough, and by being so you will have the best time in "the world".
Posted by Daria Sellon McQuade at 10:11 AM