THE HISTORY OF SING-PAI-DEK or as he came to be known, ORACULUS

Little is known of the ancient philosopher Sing-Pai-Dek (Oraculus).The following information was found inside a ceramic box in a temple located on the mountain range near Kang-Bo. Five scrolls were discovered inside the box which corresponded with the Masters lifetime, who is believed to have lived in the era of Emperor Cheng-Buk 5000 B.C. A tattered robe was found in the box as well, which for many years was believed to have been worn by Sing-Pai-Dek which he left when he ascended to his Kingdom in the Clouds. 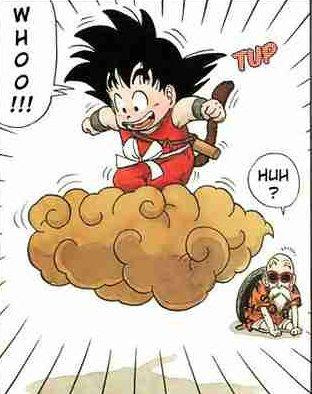 So it was written by Sing-Pai-Dek enthusiast Arthur Kingsberry in 2000, “And then he removed his tattered robe and threw it in the box, for earthly pleasures such as clothing were no longer of interest to him”. The robe has since been dated back to 1981, but Kingsberry’s explanation still holds some validity, particularly with his Mother and several close friends.
A rare photo of Kingsberry modelling the sacred ensemble 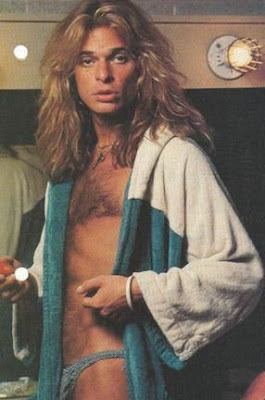 And so follows the miraculous but short history of Oraculus, a man who preceded Confucius, Jesus, Buddha, and Sophocles. A man who, some say, was more enlightened than all of the former put together...

4899 B.C. - Sing-Pai is born to the Dek Family. His Mother, Yeng-Pai, immediately put’s him to work in the rice fields and the future philosopher let loose his grand wisdom at age six months, “Jay-yung tsang deng-wai”, or in english, “Rice field. Hard work for baby.” His Father quickly runs home and writes down his son’s first words, then hurries back to the field to throttle him. Today it is considered one of Sing-Pai’s most logical quotations.
"Someday I will get back at my parents for forcing me into child labor, utilizing a passive aggressive form of Zen Haikus." 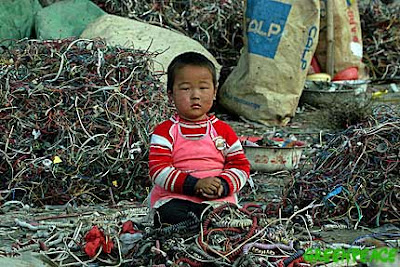 4938 B.C. - Little is known of Sing Pai from age six months to 39, when he made his great pilgrimage to Zhengshui, and called to Emperor Cheng-Buk from the grand courtyard. It is here that he spouted the following mystical observations, prompting he Emperor to come listen from his steam bath:
“Bird flies north. Lilies float in pond.” 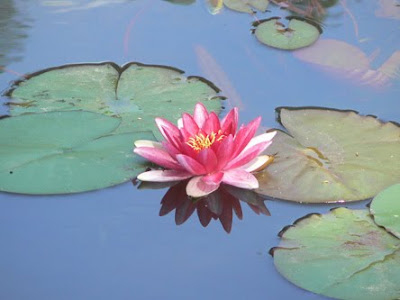 “One hand holding another hand leads to two hands holding." 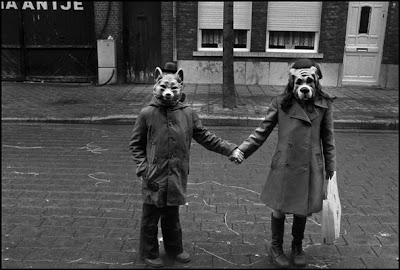 “Gold is a diversion of the eye. Money is wonderful.” 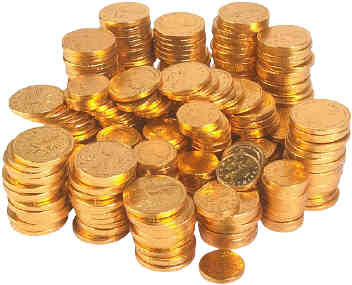 “Poor of heart and dirty of face. Lily floating in pond.”
“If all enemy is friend, then my friend is enemy. Bird... Flying North.”
This last line enraged the emperor, who believed Sing-Pai to be accusing him of tyranny due to his proximity with northern locations.
Cheng-Buk, enraged 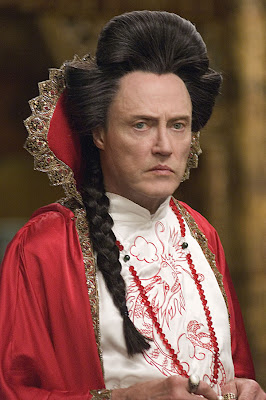 He called for the public beheading of Sing-Pai for the following day. While in prison, Sing-Pai wrote down the following tablet:
“Cold walls. No food. Fun is everywhere!”
When the Emperor saw what Sing-Pai had written, he could not believe what his eyes were reading. He had a change of heart and had Sing Pai locked up in an even smaller dungeon, to see what he would write under more extreme conditions. 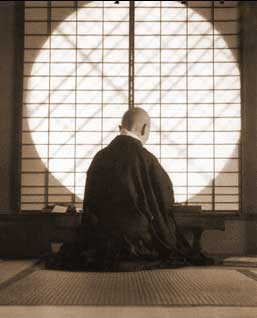 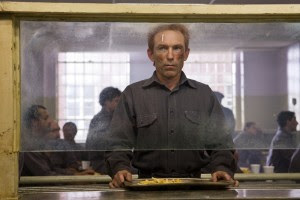 4489 B.C.: Sing Pai remains in prison, but is not beheaded for the Emperor finds his observations spiritually significant. Specifically after hearing what is considered Sing Pai’s famously poignant and un-lucid saying to date:
“Cherry blossom floating in air. I am beheaded soon. I am full of cherry blossom!”
Emperor Cheng-Buk dies of a weight-related heart attack soon after. He is succeeded by his son, Deng-Buk, who does not share his Father’s spiritual enthuisasm. Sing Pei is exiled to he mountains of Vong-Kei-Pao.
Monument of Cheng-Buk. (Note the Buddha-like morbid obesity.) 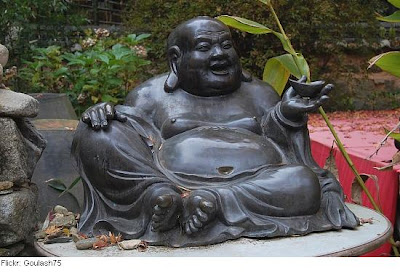 4569 B.B.: After years in exile, Sing Pai climbs further up Vong-Kai-Pao with a rice sack and writing parchments. At the top of the mountain’s highest peak he let’s loose the rice sack and quotations. It is said that he does this to “Rid himself of wisdom”, and while most of the writings ended up in a Langberrry tree located several feet away, several of them reach as far as Indonesia, most notably the “Hummingbird humming” sequence:
“Head full of sound.. Hummingbird humming. Forever”
“Sun on my face. Sleep is nice. No more humming. ”
“Hummingbird back. Listen. Listen. War inevitable.”
“Sweet silence. Sheep grazing. Peace inside.”
One can only imagine what this hummingbird represented to Sing-Pai. One explanation identifies it as a metaphor for the war that was going on below his mountain exile between Malaysia and India. It is highly probable that Sing-Pai heard the war cries of his brothers, and the eventual ceasefire. That being said, the accepted opinion is that it probably was a real bird, one that irritated Sing-Pai in some way. 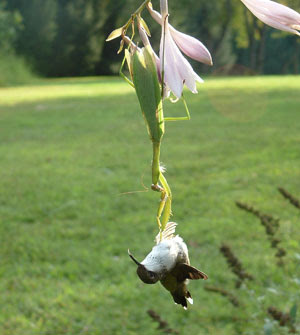 But who can know for certain? The other tablet floated down and was found two centuries later, by a peasant woman who could not read. She brought it to the current Emperor, where it in turn became immortalized as the “Sacred Wind Letter”.
“Wind blows one way. Wind blows other way. Hair in my Face.”
“Sky full of wind. Blows my rice away.”
“Suffering is illusion. Wind is real. It is everywhere.”
In this tablet Sing-Pai mentions suffering for the first time. Many scholars believe that his mountain exile was a geographically wind-prone location, and that Sing-Pai contemplated this daily, perhaps even hourly. And yet, The “Sacred Wind Letter” has four more lines where wind is not even mentioned:
“Freezing rain falling down. My robe is gone. So... Thankful?”
“Ant’s bite skin. Cricket shouts in ear. Harmony?”
“Pebbles in the rain-stream, make noise like cricket”.
“Cricket-ant. Must ascend to the heavens like wind and rain.”
It is here we see how completely content Sing-Pai is with his mountain, wind or no wind.

I hate it here but it's also kind of fun. This exemplifies the core essence of his wisdom. He comes down from the mountain and is greeted by the currant Emperor, Leng-Bok, who has been a disciple of Sing-Pai since his childhood. Sing-Pai is revered by the people, and a monastery is built in his honor. Once he enters, he is never to re-emerge in public again. Over the years many become his devotees and he asks them henceforth to refer to him in the Latin vernacular ‘Oraculus’. No one is quite sure why but everybody just rolls with it. During the last years of his life takes a vow of silence, but does continue to write his tablets, two to 100 a day on an average basis.
“Time flying like a crow. Crow stops to eat worm. Time doesn’t eat worm”.
(Wise beyond his years, he was the first to point out that time flies).
“Cat stuck in cherry blossom tree. Lily floating in pond. Anger is happy!” 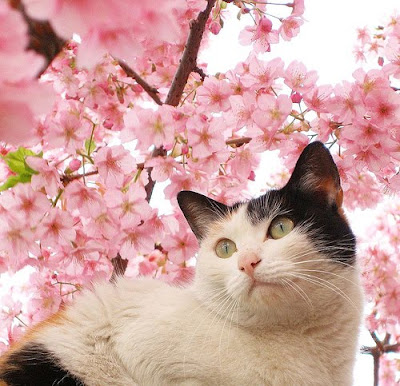 (Here again is the ‘Lily floating in pond’ reference. To Sing-Pai, this was the ultimate state of being; it represented the dissolution of anger and ultimately, intelligence itself. Hence the next line:)
“Rice bowl. Music monkey. Listen close!” 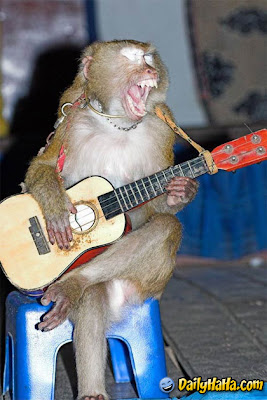 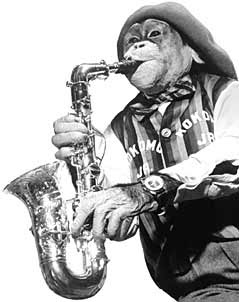 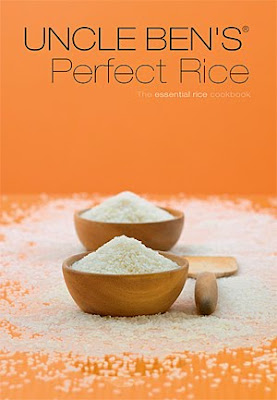 (This one has an urgent message: A bowl of rice, a monkey making sounds... We must listen to them both uniform diligence. Sing-Pei often told his disciples to listen to inanimate objects, which is why you could often point them out in public places even though they had no strict rules of wardrobe or hairstyles ). 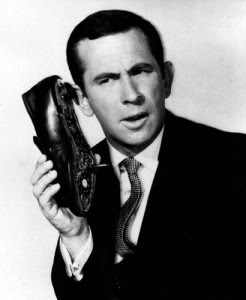 “Silverfish in the lake."
(He seemed to have grown tired of the 'lily in pond' refrain and changed it up)
"Gold coin in the hand. Say yes to money!”
Sing-Pai loved money. He never actually bought anything in his life, but he thought it was beautiful to look at and the idea of it filled him with joy. He has many tablets about currency- three hundred and twenty-five, to be exact.
Sing Pei contemplating Powerball. 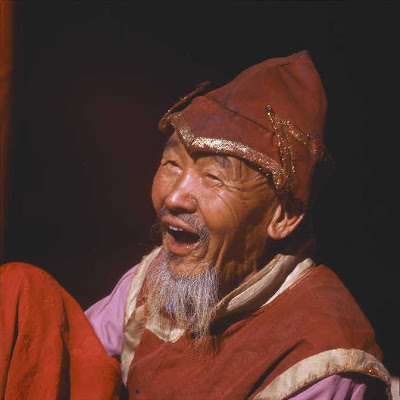 Posted by Daria Sellon McQuade at 9:47 AM