MYSTERIES OF THE TAROT: REVEALED!

The Tarot, or “Tarrow” as it was once spelled back in a time of my life when was grammar unimportant to me, is an ancient form of divination/card game, similar to poker but infinitely more valuable. Knowledge of future heartbreak, impending disease and death, or plastic chips? I’ll take the knowledge of impending death thank you very much. But the tarot is not limited to the grim, inescapable future. Romance, travel, getting a great new job...all these can be revealed in the 22-card deck. I say ‘can be’ because it’s slim to none that good things are seen in the cards; in my experience they mostly just foretell the horrors to come. Join me today as I introduce the curious reader to the Major Arcana cards and the meaning behind them! 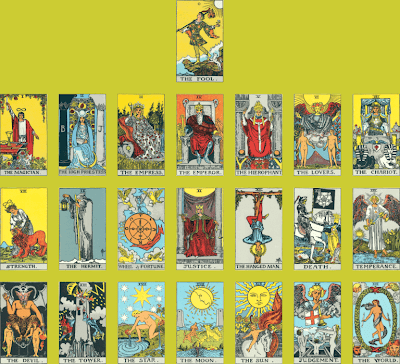 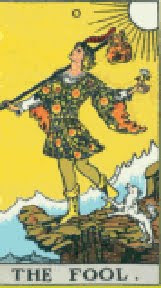 THE FOOL
The card shows a young man, in Renaissance Fair outfit, holding a flower. He is perched atop a cliff, and about to fall off it but doesn't even care because he’s looking at the pretty sky. Basically, this card represents our childlike wonderment, or “soul idiocy”. When this card is shown in the traditional three card spread, it usually indicates that you are about to try drugs for the first time and/or you may be hit by a vehicle. Either way, the Fool is a powerful card even if it shows a very stupid person in the picture. 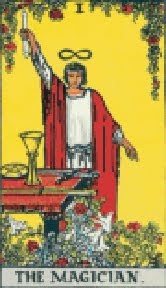 THE MAGICIAN
The Magician stands at a table with a magical symbol over his head. There are magical things on the table - a giant cup, and a Jewish plate. He holds aloft a scroll, or it could be candle, it’s hard to say. Also, there are grape vines. The Magician represents the power of wine, and its relevance in making crucial decisions in life. When this card is revealed in the three card spread, you will probably be drunk within the day or sometime the following week. (Not necessarily on wine, that is just a spiritual symbol for any alcoholic beverage.). 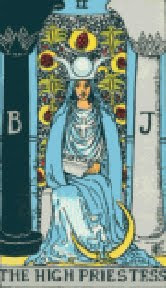 THE HIGH PRIESTESS
Well. Somebody thinks she is quite a big deal. This young lady is the precursor to The Empress, so she is probably her daughter. She is shown sitting at a throne flanked by two columns with the initials “B” on one side and”J” on the other (It is considered ok to laugh the first 3 times you notice this but after that you will be scolded by your gypsy). If this card is revealed, it is possible you are going through relationship problems, or you're about to get a bill in the mail that will be of insignificant sum. 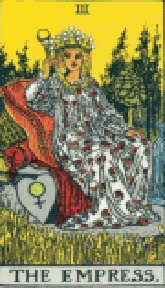 THE EMPRESS
The Empress is shown on a sled with a shield next to her. She’s holding a staff in her hand, and wearing a cuter outfit than her daughter. She is prettier too. Basically, she’s the same as the high priestess but just older, and she’s married to the next card, the Emperor. The shield indicates that she has protection from evil elements, and when this card is displayed you should probably throw out any old potato salad in your refrigerator, or consider buying a down jacket. 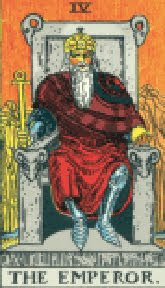 THE EMPEROR
He is the King. His throne is made out of baby goats. He’s holding a staff in his hand too. He is symbolic of the domination over the weak, and when revealed in a spread, some Tarot readers will tell you this card represents personal strength, but I think it means you are going to be a victimized by a homophobe, even if you're not gay. Let me be clear: I do not like this person. I think he should be taken out of the deck and replaced by a baby Bengal tiger, but that’s just my opinion. 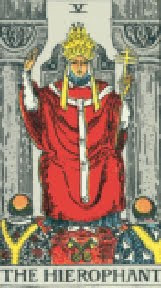 THE HIEROPHANT
This is the Emperor's psychic. He goes to him and asks him questions, such as, “Who shall I victimize next? Who should I plunder?”. The Hierophant is very wise and this is revealed by observing the two men beneath him. They are asking him questions constantly. Everyone asks the Hierophant questions, so when he shows up in a spread you should ask yourself why you make so many mistakes in life, and agonize over that for several days. 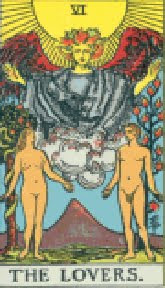 THE LOVERS
One would assume this card means you are in a solid romantic relationship, or headed in that direction. This is inaccurate. Notice the giant angel-looking woman over the two lovers? That is a demon and she's pushing the lovers away from each other, because she just doesn’t like seeing people happy I guess. Just a bitter demon. The Lovers shown in conjunction with the Emperor is just about the worst spread imaginable. Every time this card comes up for me I get broken up with by text message. 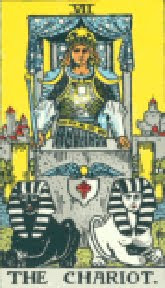 THE CHARIOT
This card depicts a man in a chariot driven by two Egyptian pharaohs. He is going someplace, but where? And how come he is so important that the pharaohs carry him around? This card means you are most likely about to gain celebrity or fame for something that you don’t deserve. I call this the Paris Hilton card of the major Arcana. 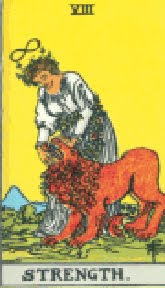 STRENGTH
Here is a nice woman who is looking inside the mouth of a lion like it’s no big deal. She has a magical symbol above her head, so I think she is the Magician's wife. She is friends with lions so what more can you say? She is strong. This card often means you are spending too much time on the internet, and must be strong and just try and read a book or something. Read a book about lions! 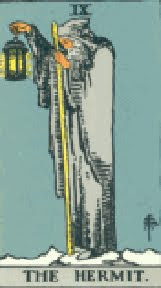 THE HERMIT
This is a lonely man, but he likes it that way. He walks the earth with a cane and holds a lamp because he only likes the dark. I think he might be a vampire. A foreboding card, for me at any rate. When this card came up for me recently, I soon lost my ATM card and was nearly hit by a water balloon thrown from a high distance. 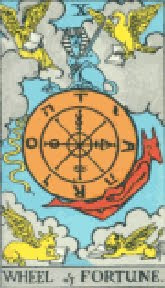 WHEEL OF FORTUNE
There is so much going on here, snakes and angels and griffins and a pharaoh and a demon. Everybody is reading magazines, and naturally there is a wheel of fortune in the center. This card represents destiny and when revealed in conjunction with the Empress card and the Fool, you may soon be going into a phase in your life that is either slightly self-destructive or highly self-destructive. 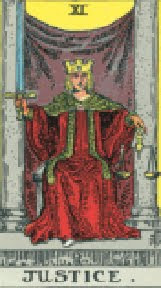 JUSTICE
A stern-faced man/woman with a crown on his/her head. They hold a scale in their hands. This card is pretty self-explanatory. If you have recently had an argument with a friend and this card turns up, they will probably call you and apologize. You could also get arrested for shoplifting, which is what happened to me. 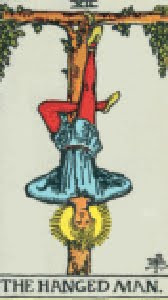 THE HANGED MAN
The following two cards seem intimidating and scary, but they are quite innocuous according to me. The hanged man depicts an upside down guy, with one leg extended and pointing to his knee. He is hanging from a pole with grape vines. I think he is exercising (It’s called Inversion Therapy... it’s fun!) and most definately drunk. He looks pretty happy to me. I believe this card implies you are entering a healthy drunken stage in your life. 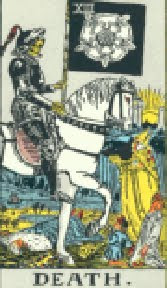 DEATH
People are always scared of this card but that’s just ignorant. Anybody familiar with the Tarot knows that the death card does not indicate a real death occuring (That would be the Fool card, or the Emperor). The card is great because it implies the death of bad habits, such as putting cigarettes out on your plate after dinner, or throwing pennies in the garbage because they annoy you. I appreciate when I see this card in a spread, because I know that it means someday I will stop obsessively cleaning my ears with q-tips. 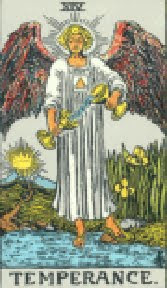 TEMPERANCE
Temperance is all about calming down, not running around like a crazy person. Serenity. Inner peace. I think whoever invented the tarot felt pressure from their girlfriend to put something tame and un-scary in between Death and The Devil. When I get this card in a spread I try and ignore the ‘ance’ part of temperance and focus on the ‘temper’ part, because what’s healthier: a fiery temper that compels you to throw your pint glass in a crowded bar at a girl that might be talking to your man or taking it easy? I think my Grandmother said it best “Take it easy? How bout ‘make it sleazy!”. Well said, Grandma. 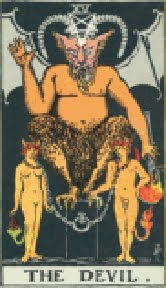 THE DEVIL
Most are familiar with this card - horned winged creature with hoofs.. It would appear that the Devil has gotten the lovers from the Lovers card, chained them together, and now they are his slaves. Well that’s just not true. I think this “Devil” is a match-making goat angel, and he has just hooked up two lonely people. This card is badly misinterpreted. In fact, I secretly hide extra copies of the Devil into my decks when I do readings, that’s how much I love this card. I met my boyfriend through this card! 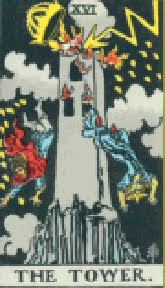 THE TOWER
This one is pretty bad looking and it is unfortunately accurate. It shows a tower cracked by a thunderbolt, exploding into flames, some poor person being jettisoned out the tower window. If you get this card stay away from towers and thunderstorms. But the sad reality is that despite avoiding those things you will plummet from an exploding tower either way.
To Be Continued...
Posted by Daria Sellon McQuade at 9:30 PM