"At moments of great enthusiasm it seems to me that no one in the world has ever made something this beautiful and important."
-M.C. Escher

“Theo, the more I think about it, the more I realize there would nothing more valuable to my artistic soul than being a composite sketch artist for my local police precinct."
-Vincent Van Gogh
I often wonder if, without art, would we ever have evolved from the apes? Imagine the first caveman who held aloft a stick dipped in dinosaur feces, preparing himself to draw a picture of some guy killing a woolly mammoth or dragging his girlfriend by the hair into his cave. Imagine if he suddenly decided it was a stupid idea. Said to himself "It's not gonna come out looking good anyway, whats the point?". So he just goes back to doing the same sad routine he plays out everyday...hitting bones with other bones because it's fun, right?

(It does look fun) 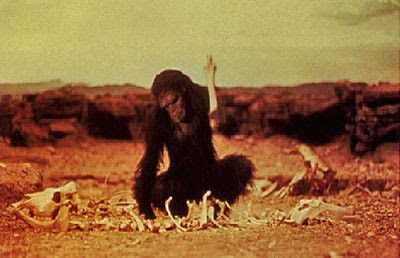 But maybe one day he picks up the stick again and rubs it with another stick and invents fire, the most destructive element known to man. Without art, we would only have fire. And what is fire really, but something to burn down a house or a church with? Art will not burn down your house. It may leave you homeless. But an artist can always crash on someones couch, simply by trading some of their art if the alleged 'someone' agrees it will make their apartment look cool.
I feel art is like oxygen. Without it I see a world metaphorically gasping for air, slowly suffocating from not being able to see Damien Hirst’s latest “Room With Nothing In It Except For A Photograph Of An Empty Room” installation.
I don't even want to live in blood diamond encrusted skull-less world 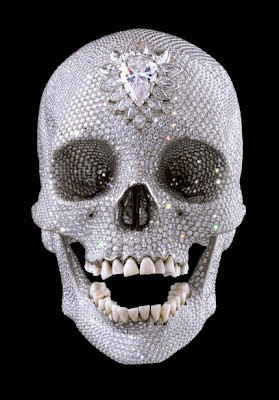 I repeatedly imagine this terrible scenario: Michelangelo is painting the Sistine Chapel, and it's looking really good. He's only painted one angel- looking person but you already know the rest in gonna come out looking awesome. Suddenly, out of nowhere his hands are sliced off by a rogue machete, telekineticly launched at him by Carrie White from the movie ‘Carrie’. (In this scenario he has been pointing at her and chanting “They’re all gonna laugh at you” over and over again so you can’t really blame her). 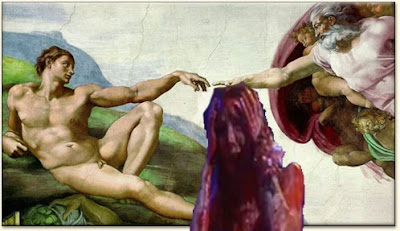 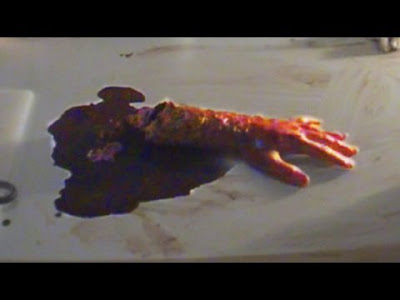 I also imagine this "Twilight Zone" fantasy: What if Picasso had decided not to be a painter and chose to be a writer instead? . In place of ‘Les Demoiselles d'Avignon’ we would have a shitty book* describing how cute his dog Lump is, and how great whores are at doing sex with him.
What's Cubism? There isn't any. 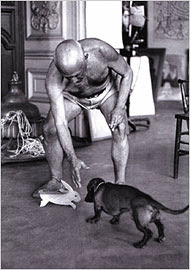 Last but not least is Vincent Van Gogh, who single ear-edly has become the international paradigm for 'artists that nobody notices are geniuses until they die'. (Or 'ATNNAGUTD' ). Van Gogh painted the underbelly of the Dutch world. The opium addicts, the potato peelers, the- weird-of-face, and most importantly, the criminal element. As I have spent the last 12 years working as freelance forensic/composite artist for various law enforcement agencies, I often feel the ghostly presence of Van Gogh hovering over me whispering in my ear “Cut it off...”. Then he says to me “Beth, there is no blue without yellow and without orange.” Then I say, “I only work in with a # 2 pencil or black charcoal”. And then he says “Use colored pastels” and then I say “But we don't do composite sketches in color” and then he's all “Beth, just shut the hell up and listen to me! Your making me want to cut off my other ear!" and then I hear his brother saying “Vincent, you must leave Beth now, it's time to return to the sanitarium. Get back in your room with no windows and make more paintings from memory that nobody will ever buy."
Then he’s gone. But he’s never really gone. He is my spirit animal, and his paintings are on all my coffee cups. 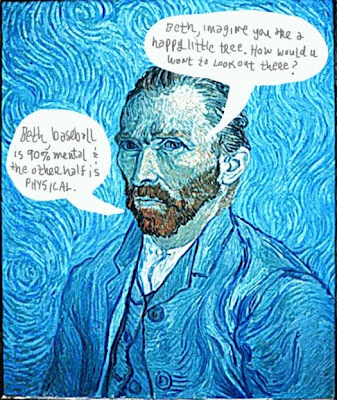 I have just recently developed a Composite Sketch Drawing Workshop. I want to share with you some of my most recent pieces that I feel embody the essence of artistic freedom and it’s unquestionable impact on society. The reality of composite sketch art is not merely about apprehending trench coat flashers, muggers and kleptos. It's also about finding your dreams and realizing your passions in the wondrous renderings of people's faces described by victims who have been traumatized* to the point of hysteria.
*Only occasionally resulting in mass confusion over the difference between Latino, Asian, and Black facial features

I call this "The Extinction of Free Speech (Species)". This man has zipped up his windbreaker to the point where he is nearly mouthless. He has conflicted his free speech out of his own 'free' will (a fascinating dichotomy), and chooses to communicate with his hands, although he is too lazy to learn sign language. 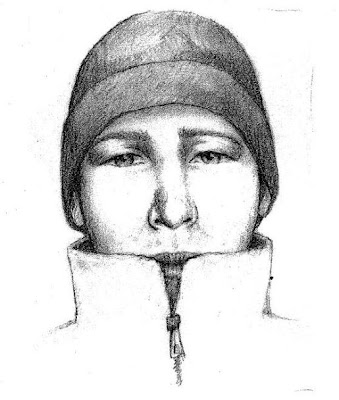 "The Duality of Dualism". This shows two separate representations of the same man. Who is he? The first picture and the second one? Or the second picture and the first? (You may discuss this during my workshop. I am open to your individual opinions but just know that I only adhere to my own. Hint: He is neither of these guys.) 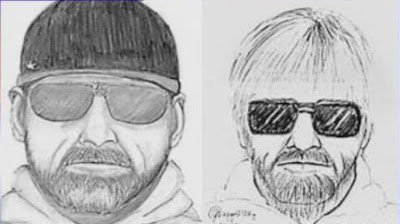 Here is an example of using diversity to convey artistic sentiment. I wanted this piece to emphasize that the young man was a talented musician, with dreams of being a contestant on American Idol. Which is probably why he robbed that guitar shop. 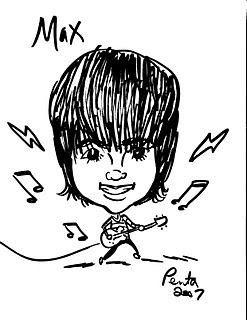 I threw this in here as an example of the "Flash in the Pan" type of composite sketch artist who has merely gained attention for his/her famous subject and whose heart clearly was not in the work. This person below could be anybody. It has no personality, no whimsy. It aspires to nothing but mediocrity. 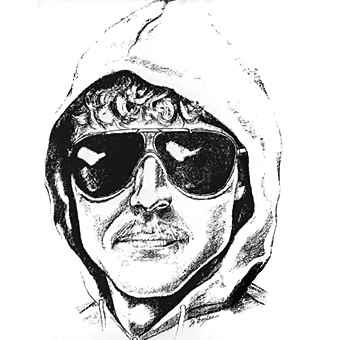 These two companion pieces are some of my latest work. They are entitled "So Sweet and Low, the Diabetic" and I drew them during a frenzy of creativity. As you can see, they sold within days. (In my industry arrested indicates 'SOLD'). It's true. You can look it up. 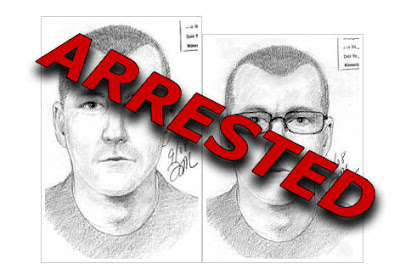 Here's a female serial killer. These women are very rare so I call this piece "The Pearl of The Ocean". Adrift in a 'sea' of murderous homicidal rage, so I made her facial expression very enigmatic. She is like "Hmm...Lalala...maybe I hate you, maybe I like you, maybe I want to kill you". Very 'Mona Lisa-esque'. 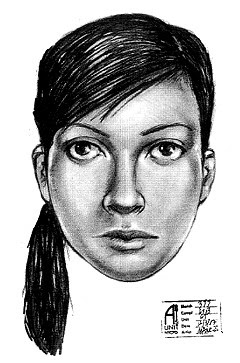 Lastly, I have a piece by a current student of mine Patrick McQuade. Patrick's talent is evident in the wild shock of hair, the riveting eyes and his superior draftsmanship of this sex offender (still wanted by the FBI.) Patrick couldn't think of a name so I like to call it" Showtime At The Apollo". 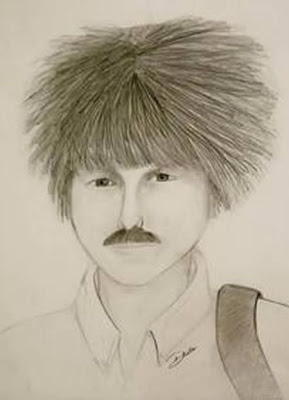