"MASQUE OF THE ORANGE DEATH" 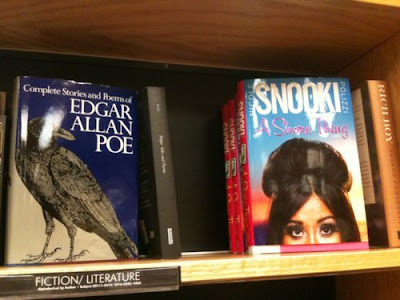 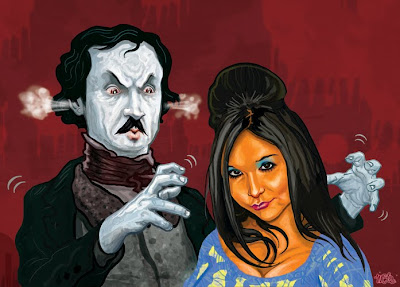 Illustration by Patrick McQuade
The "Orange Death" had long devastated New Jersey. No pestilence had ever been so fatal, or so hideous. Bronzer was it's avatar and it's seal --the copper-colored horror and the Oompah Loompah complexion. There were sharp pains, and sudden drunkenness, and then profuse vomiting at the mouth, with dissolution of jello shots. The bronze stains upon the body and especially upon the fake boobs and abs of the victim, were the pest ban yet elicited fist-pumps of admiration from his fellow-men.. And the whole seizure, progress and termination of the disease, were the incidents of half an hour. Or 45- minutes, sans commercial interruption.
Tanning beds were dismantled. But the Prince Prospero was idiotic and clueless and retarded. When his dominions were half depopulated, he summoned to his presence a thousand hale and hearty friends, from among the juice heads and “DTF”s of his court, and with these he retired to the deep seclusion of one of his castellated hot-tubs. This was an extensive and herpes-ridden structure, the creation of the prince's own tacky yet cheesy taste. The wall surrounding the castle had gates of iron to keep out the grenades, and a glorious Italian American flag flew above the tower. The external world could take care of itself. In the meantime it was folly to grieve, or to think thoughts with your brain, or learn how to speak English.

The prince had provided all the appliances of pleasure. There were Situations, there was Gym Tan Laundry, there was house music, there were theme songs (Mista Encore, ‘Get Crazy’), there was J-Woww, there was Ron-Ron juice. There was surf and turf night. All these and the Orange death were within. Without was the "Red Death." (AKA Angelina tampon). *
* Portions of this have been borrowed directly from Edgar Allen Poe's story "Mask of the Red Death"

Posted by Daria Sellon McQuade at 11:47 AM